Dimethyl Sulfide is also used as a flavor and fragrance intermediate, which enriches the aroma and flavor of certain consumer products.

Our gas odorants are produced from high quality feedstocks, ensuring a reliable and effective product.

Dimethyl Sulfide (DMS) is a presulfiding agent for steam cracking, the process that turns hydrocarbons into ethylene and propylene, which is used for olefin-based products. DMS is added to the feedstock to reduce coke and carbon monoxide formation during the high temperature thermal cracking of hydrocarbons in the tubular reactors. The deposition of coke on the boundary layer can significantly affect the run length, yields, and the coil life of a pyrolysis furnace. In addition, carbon monoxide is a poison for downstream catalysts. DMS acts as an efficient H2S precursor, which allows for H2S to form at the metal interface. The sulfur is absorbed to inhibit reactions.

DMS directly and completely decomposes to H2S at 1470°F (although some trace CS2 may remain), suitable for furnace operating temperatures. DMS usually requires only one injection point in the charge gas as DMS will disperse fairly well throughout the furnace system.

DMS is a highly flammable material and should be handled accordingly—stored under inert conditions and away from potential ignition sources. DMS is a dermal, oral, and toxic inhalation material with a highly unpleasant odor. It is slightly soluble with water, but soluble in alcohols, ketones, and amines. DMS is compatible with both carbon and stainless steel as long as excess water is not present. Brass and copper connections are not recommended. Gaskets should be Teflon or Viton since DMS tends to attack rubber and nitrile elastomers.

Household bleach (not pure bleach) or Liquid Alive® is suggested for any necessary clean up. When handling DMS, precautions should be made as pressure can build up in confined spaces such as hoses. Please reference the Material Safety Data Sheets for additional handling and safety recommendations. 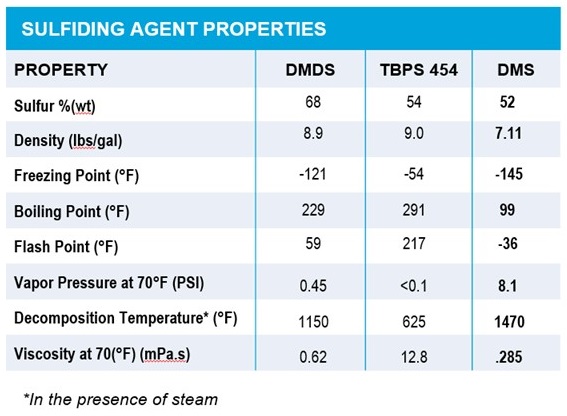 After furnace tubes are de-coked, feedstock with DMS is injected in order to passivate the furnace tubes. The rate of continuous injection is determined by the feed rate of the feedstock and its sulfur content. The lower the sulfur content of the feedstock, the higher the injection rate of the DMS needed. During the initial passivation step, DMS is normally injected at twice the normal rates. The feedstock is then mixed with steam and heated in a furnace for cracking. The radiant coils in the furnace are the predominant location where coking will occur. The gases are then sent to the transfer line exchanger, the second place where coking will occur. See figure below for basic steam cracker process. 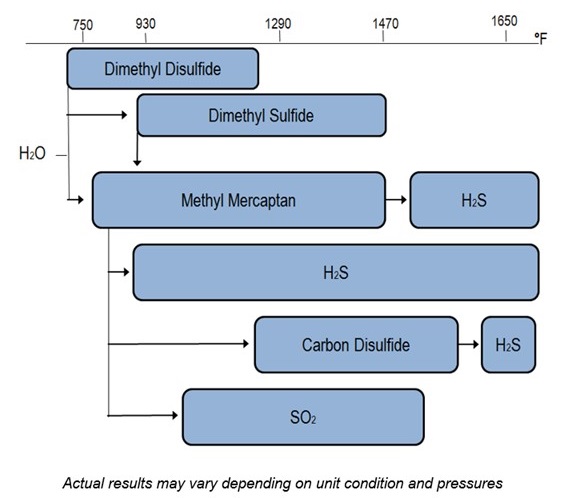 DMS, by decomposing to H2S, will mitigate the creation of coke. The sulfur absorption blocks the peripheral site and prevents further coking by creating an iron sulfide layer at the reaction site. In addition, the H2S reacts with the CO, formed by the reaction of hydrocarbons or coke with steam, by catalyzing the water gas shift reaction which converts the CO to carbon dioxide (CO2). After the initial passivation step is complete, the DMS injection rate is reduced but continued to maintain a partial presence of H2S in the furnace, maintaining the iron sulfide layer. Keep in mind that not all the sulfur content of the sulfiding agent converts to H2S, as there is also SO2 formation to be managed.

Decomposition of DMDS and DMS in the Presence of Steam 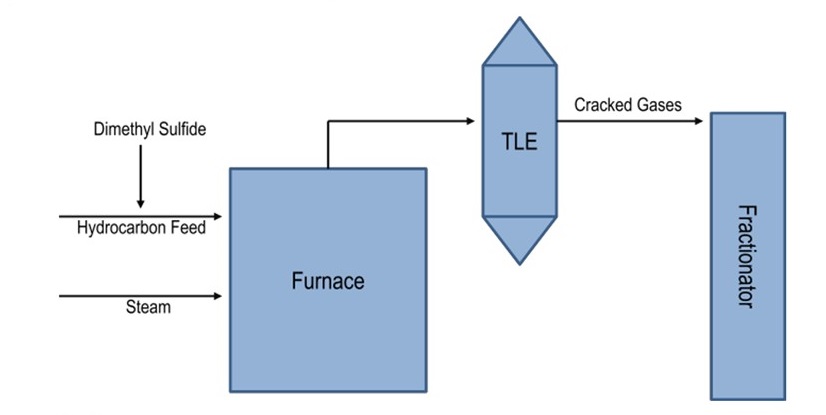 In addition to DMS, DMDS and TBPS 454 can also be used for this application. Please reference those Technical Data Sheets for additional details.