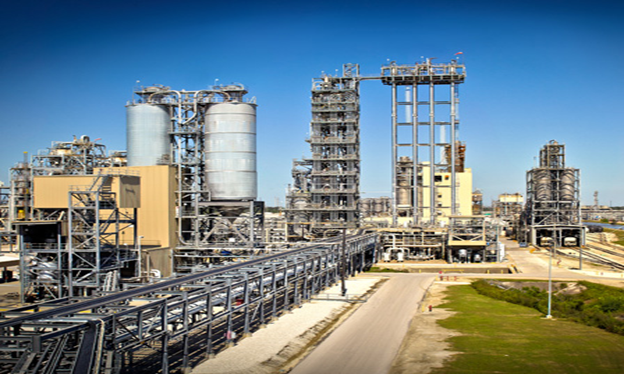 When our breakthrough loop slurry process was formally introduced in 1961, it immediately revolutionized the production of high-density polyethylene. Today we are a world leader in polyethylene production and licensing, with more than 1,000 related patents and more than 80 licensed plants in 20 countries.

Our MarTECH™ loop slurry technology is the result of relentless focus on innovation. This cutting-edge technology achieves some of the widest product flexibility and largest world-scale facilities. We work directly with licensees to identify opportunities for further technology improvements and cost savings. That is why, year after year, Chevron Phillips Chemical continues to be an industry leader in innovation. 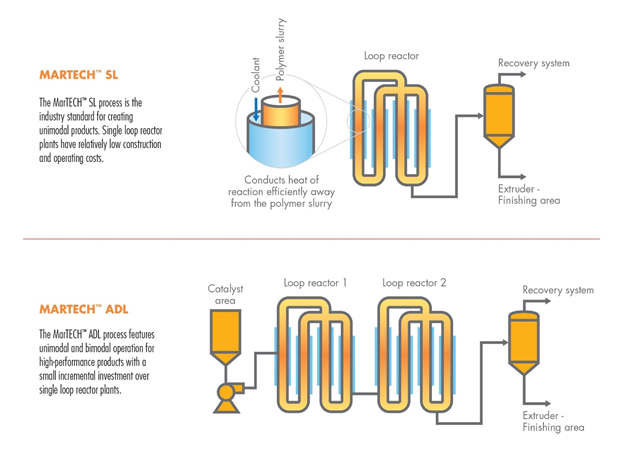 Used in both the Single Loop (SL) and Advanced Dual Loop (ADL) designs, the MarTECH™ loop slurry process represents one of the most widely accepted polyethylene production technologies in the industry.

We are the exclusive licensor of the Advanced Dual Loop (ADL) technology. This state-of-the-art series reactor technology is a collaboration between Chevron Phillips Chemical and Total Petrochemicals. The ADL technology is capable of producing up to 500 kMTA and incorporates key advancements from modern loop slurry design. The MarTECH™ ADL process is capable of producing the unique bimodal dual loop products such as PE 100 pipe grades, Extreme Resistance to Crack (XRC) initiation pipe grades, bimodal films and enhanced bimodal blow molding resins, as well as the full product range of MarTECH™ technology SL products. 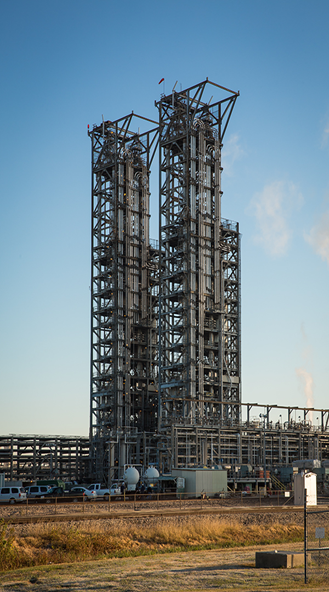 Advantages available in our breakthrough MarTECH™ loop slurry process today include low-cost world-scale reactor designs, efficient and reliable operations, proprietary catalysts, and one of the widest ranges of polyethylene products. The worldwide reputation and the exceptional resin margins produced by our technology give licensees a global advantage.

Competing technologies require more complicated processes and techniques, increasing the cost to build and operate a facility. The MarTECH™ process benefits from a simpler design that allows for fast and less expensive construction, as well as simpler and more reliable operation.

Over the past two decades, a concerted engineering effort has allowed us to reduce process complexity of the plant design. These innovations have helped reduce the capital cost of construction by nearly 50% compared to earlier designs.

The current generation of loop slurry plants is a cumulative result of more than 50 years of scientific discovery and engineering design. In the past 20 years, Chevron Phillips Chemical scientists and engineers seeking to reduce capital and operating costs have made more than 100 design and mechanical improvements.

The MarTECH™ loop slurry process is capable of producing a wide range of polyethylene products, from a variety of catalyst types. Each type of polymer offers specific characteristics and end-use advantages.

Resins made with MarTECH™ loop slurry technology are the benchmark for high quality in many industries and often command a premium over competing products. Resins from the MarTECH™ process are the overwhelming choice for liquid food containers, household and industrial chemical (HIC) containers, pipe, geomembranes, industrial drums, and many other large-scale applications. Polyethylene resins made from the MarTECH™ loop slurry technology account for more than 20% of worldwide HDPE. Due to this wide acceptance, MarTECH™ process facilities have enjoyed among the highest margins year after year.

In 1951, research chemists Paul Hogan and Robert Banks were working to improve yields of high-octane gasoline when they discovered two of the world’s most essential plastics — polypropylene and high-density polyethylene. From that initial discovery came the development of the first commercially feasible polymerization process.

Today, Chevron Phillips Chemical research and development teams continue to develop more cost-effective ways to manufacture polyethylene. In the past ten years, the company’s scientists and engineers have implemented more than 100 separate improvements that have led to increased production, improved economy-of-scale due to major increases in the maximum reactor size, and significant decreases in the amount of energy and feedstock consumption required per pound of polymer.