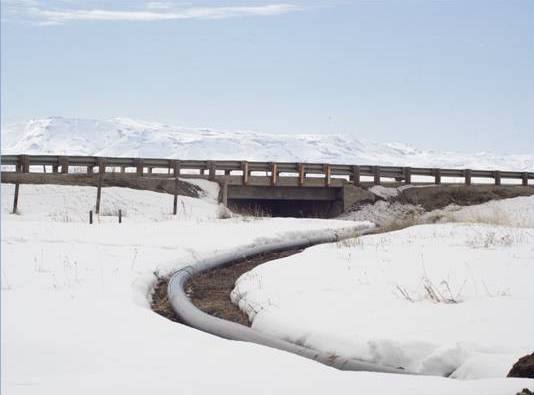 Fairfield, Idaho is known for its abundance of outdoor recreational activities and beautiful snowcapped mountains. So when studies uncovered that old, cracking wastewater pipe was leaking raw sewage into the area’s pristine lakes and streams, city leaders immediately took action. Studies showed that Fairfield’s aging infrastructure was incapable of supporting new growth, making it impossible to issue new wastewater connections and essentially halting any new development. Armed with a grant and low-interest loan from the USDA and Idaho Department of Commerce, the city of Fairfield chose to replace its entire wastewater system.

In 1964, Fairfield installed concrete pipe; however the pipe’s tendency to develop cracks and holes was exacerbated by Fairfield’s extreme cold and icy winters. In the mid-1980's, Fairfield replaced the concrete with PVC pipe which should have lasted up to 50 years. Unfortunately the poorly installed PVC pipe began to crack. In an effort to find a long-term solution, the city of Fairfield elected to use Performance Pipe's HDPE pipe for its flexibility, leak-free reliability, and ease of use in trenchless installation. "We wanted a fused pipe system free of joints without infiltration or exfiltration to reduce the possibility of willow tree root intrusion which has been a big problem," said J.L. Staley, public works superintendent, City of Fairfield.

Performance Pipe manufactured 4-, 6-, 8-, 10-, and 12-inch DR 17 and DR 21 for the main sewer lines. Trenchless pipe bursting was selected as the method of repair. "For trenchless applications, HDPE pipe is the material of choice. I wouldn't use anything else," said Brian Jones, technician for Titan Technologies, a contracting firm in Boise, Idaho.

HDPE pipe provided the City of Fairfield with both financial and environmental benefits. “Utilizing trenchless pipe bursting instead of traditional open cut methods saved the city at least $1.5MM," explained Scott Marolf, Fairfield city councilman. "This project will save the community untold future dollars from infiltration problems and will protect the environment from the release of raw untreated sewage," said Terry Lee, Fairfield city councilman.