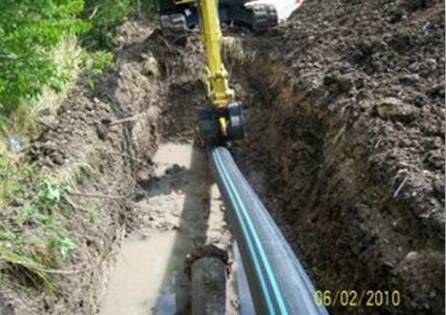 Much of the Austin, Texas water utility's water transmission infractructure consists of cast iron pipes that date back to the early part of the 20th century. To meet growing demand and eliminate water loss caused by leaks and deterioration in this drought-prone region, the City of Austin decided to upgrade and replace a portion of the Elroy Transmission Main. The area was experiencing water loss as well as a capacity problem due to the existing udersized and deteriorating pipe.

The Elroy Transmission Main project consisted of replacing 7,400 linear feet of existing 6-inch cast iron pipe with 10" high-density polyethylene (HDPE) pipe. Pipe-bursting trenchless technology was selected as the repair installation method – marking the first time the City of Austin had used HDPE for water main transmission. HDPE pipe was selected for its leak-free joints, resistance to corrosion, and its ability to be fused together into one continuous pipeline.

For the new waterline, Performance Pipe provided over 100,000 pounds of 10-inch DR11 PE3608 (PE3408) HDPE pipe to replace the existing 6-inch cast iron pipe. The new pipe segments were assembled at a temporary shop using heat fusion and brought to the site pre-chlorinated. The butt fusion process forms joints which are permanently leak-free and self-restrained against pull out forces. Mechanical joint adapters were used where fire hydrants and valves were installed. Wall anchors were designed and constructed for pull out forces where the new HDPE pipe was connected to the existing cast iron pipes. Additionally all service connections were upgraded to 2-inch HDPE lines.

Utilizing HDPE for the Elroy Transmission Main upgrade and modernization project provided the City of Austin with an environmentally sensitive and leak-free water line. The replacement HDPE is engineered to resist corrosion and endure drought and flood conditions for more than 100 years, making it a cost-effective and highly reliable long-term solution. With trenchless pipe-bursting, traffic disruptions were minimal and the project was completed ahead of schedule in less than two months. Additionally, the City of Austin saved approximately 40 percent in construction costs by using trenchless technology versus a traditional open cut installation.