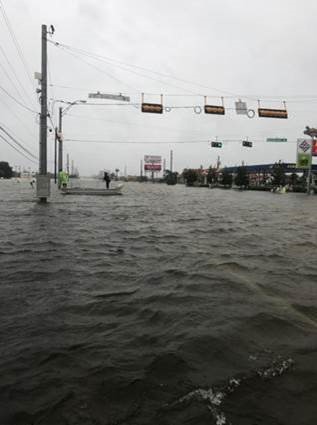 "We have a company full of heroes and incredible people," said Mark Lashier, CEO and President of Chevron Phillips Chemical. "These extraordinary employees, and many others across our company, answered the call to help our communities in a time of great need. It is a tremendous honor to lead and work with such selfless professionals who put the needs of others ahead of their own."

Jason Meyer and Rusty Till, maintenance specialists, Cedar Bayou
Jason Meyer and Rusty Till are avid boaters, so when Hurricane Harvey flooded the neighborhoods around them, they ran rescue missions for several days.
Meyer and two friends took out his boat and met up with Meyer's brother-in-law, who also was ready with his boat. The group connected with the Old River Navy through the Zello push-to-talk app and worked with dispatcher Susan Zabranek, wife of Meyer's colleague, Robert Zbranek, maintenance planner/scheduler at Cedar Bayou. The group evacuated stranded residents across Baytown for three days.
They spent 12 hours in Country Meadows, where Meyer estimates they rescued at least 60 people. Meyer also helped to evacuate Derek Haywood, project engineering superintendent at Cedar Bayou, and his family.
In Anahuac, Till was ready with his airboat when a call came from the Chambers County Sheriff's Department, which needed help taking paramedics to flooded homes.
"I told my wife that we are so fortunate, so blessed our house was not flooded," Till said. "I couldn't sit around while I had a way to help people."
A dispatcher guided the group to houses where people with medical needs were evacuated and taken to a nearby hospital.
In the following days, Till and his son, Kade, rescued more people in various communities and ferried people to pick up medicine and other necessities.
Till estimates they helped evacuate at least 40 people over three days. His wife, Beth, took donations from neighbors, purchased supplies and rounded up friends to help deliver the goods to shelters. They also delivered dozens of pizzas to volunteers and people cleaning up their homes.
Pedro Alvarez, consolidations and reporting specialist, Finance, HQ
Pedro Alvarez escaped major damage to his home during the hurricane but with flooding all around him, he was looking for a way to help.
"One of my friends, Kenny Delgado, had just purchased a boat and felt compelled to take action," Alvarez said. "I felt fortunate to be able to help."
Alvarez and Delgado used the Zello app and Google Maps (which created a Harvey rescue layer), to join other rescue teams in areas of need around Houston.
"A crew from CNN flagged down our boat and asked if they could ride with us," Alvarez said. "For several days, we took them close into areas that were severely impacted by Harvey, and they filmed a few stories."
Alvarez estimated they rescued approximately 90 people in areas including Cypresswood, Rice Village and Bear Creek Village near the Addicks Reservoir.
After the flooding, Alvarez and friends volunteered to assist with the demolition of damaged homes for people who could not find contractors to help. See part of Alvarez's journey: Watch video
Polymers & Specialties, Specialty Chemicals, Drilling and Supply Chain employees, HQ
Seán O'Loughlin, Supply Chain performance specialist, Polymers & Specialties, lives in the Spring area with his wife, three young children and three dogs. He watched the storm carefully, but Cypress Creek rose rapidly and areas that had never flooded began taking on water. "In a matter of hours, I had two-and-a-half feet of water in my home," O'Loughlin said.
His colleague, John Washer, Odorants sales representative, Americas, Polymers & Specialties, was checking on friends from his home in Magnolia when he learned O'Loughlin needed help. He drove his truck carefully down to pick up O'Loughlin and his family. At the same time, O'Loughlin saw a rescue boat with volunteers and members of the Klein Fire Department. He flagged them down and called Washer to let him know the boat's drop-off location. Washer was waiting when the O'Loughlin family disembarked with little more than the clothes they were wearing.
"John insisted we stay at his home, and he has his hands full with three children, too," O'Loughlin said. "We could not believe his family's kindness. It was incredible."
"Seán and his family lost everything that was of any comfort to them, even clothes," Washer said. "We have plenty of room, and my kids had fun meeting new friends."
As word about O'Loughlin's situation spread, Dennis Pogar, Americas sales manager, Specialty Chemicals, circulated an email to colleagues and friends, proposing a team-building event to clear out the O'Loughlin's house.
"I knew many people who had not sustained severe damage to their home would be ready to help, Pogar said. "I invited friends, family, neighbors - anyone and everyone. We are one team, one family." After the water receded, more than 20 people descended on the O'Loughlin home, removing drywall and gutting the house.
"So many people showed up at my house, and then they took time to help some of my neighbors, too," O'Loughlin said. "My wife and I were astonished."
The team included Polymers & Specialties employees John Beighle, odorants, sulfolene and fine chemicals production manager; Patrick Christman, policy and compliance manager; Tim Woll, performance service manager; Marvin White, chemicals domestic customer account supervisor; Ryan Pritchard, technical sales manager; and Elan Watson, Western Hemisphere sales lead.
In addition, Venki Chandrashekar, Specialty Chemicals general manager, and CPChem Retiree Mike Taber joined the crew. Jill Hodges, rail operations manager, Polymers & Specialties, loaned the family a car until they can replace their vehicles, both of which were a total loss. Once the work with O'Loughlin was completed, Pogar spent several days working with boat rescue crews in other areas.
"I am so grateful for all the help I have received," O'Loughlin said. "My colleagues helped my family get our lives stabilized so much more quickly than I thought possible. They helped us immeasurably." Watch drone footage of the O'Loughlin's neighborhood during the cleanup in this video.